Hello - after some troubleshooting

My NeoSD Pro works fine except for 3 games that I noticed had sound issues:

-Metal Slug 2 - no sound effects for player (ie. bullets) - also at the title screen, it doesn't say "Metal Slug" but says the 2
-Samurai Shodown - no sound after VS screen and battle begins
-King of Fighters 98 - China Team no music

-I have tested with different rom dumps and even had a friend send his converted *.neo roms of the above 3.
-i have tested using a different SD card. The video link below shows an empty SD card for example
- have yet to test other games but so far I haven't found any issues except for the above three.
-So far, all other games have been fine (including the NeoCD stuff) and also my own "amateur" homebrew rom works as expected.

I'm really thinking its a problem with the cartridge, so Is there any troubleshooting steps I should go through?

I've linked a video capture of this strange glitch:
https://www.twitch.tv/videos/624340285
I even tried switching between AES/MVS modes from the UniBIOS in case anyone wondered if it made a difference
@1:50 - Metal Slug title screen, the announcer doesn't say "Metal Slug", but says 2
@2:15 - no bullet sounds and other sound effects
@5:35 - Samurai SHodown - sound cuts off during the VS speech and before the battle starts
@10:30 King of Fighters no China Team music.

Notes about my AES Console:
-it is a first 1 (NEO-AES)
-re-capped and overall very clean
-RGB Bypass mod and captured through OSSC
-UniBIOS 4.0 (purchased from Razoola before it was free)
-Original PSU and also a Triad Magentics PSU
(I don't think its an issue with my console)

We've not seen this reported before that I can recall.

Do you have access to another AES to test with?
Rather than PM'ing me, please send support requests to support(at)terraonion.com.

Thanks for the reply Todd. Its a problem with my consoles and not with the cart.

-I went through all of my consoles, most modded with the RGB bypass and re-capped, and 2 stock (untouched) consoles using composite cables
-I thought the modding/re-capping would have caused something to happen, but 1 of the stock AES's (no mods) reproduced the same sound problem.

I guess its safe to say that the AES weren't meant for a voltage hungry labour of love like the Neo SD Pro AES.

While I didn't have any other AES models (ie. 9v boards) to test, I've used the following 5V Power Supplies.
(The best results come from the stock 5V 3A and the Triad Magnetics 5V 4A as they didn't have any random graphic issues) 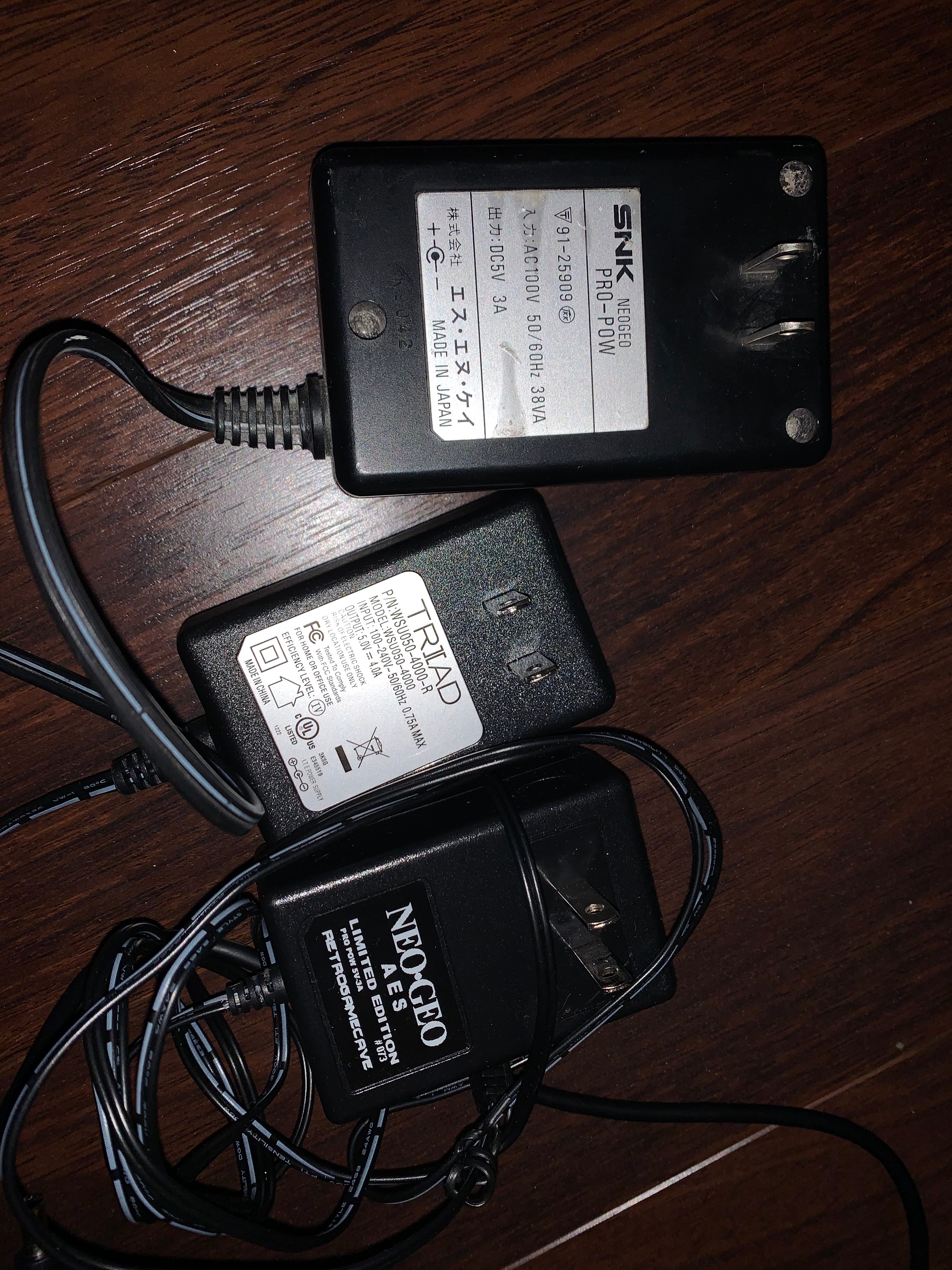 It is strange as this sound glitch only happens to these 3 games (so far).

Hopefully my (multi-power supply/multi-console) results will help others with their troubleshooting.

There is a clear picture of the Model number you can order these from other companies. Oddly enough it came in a package with http://www.japangameonline.com stickers on it.
Post Reply
4 posts • Page 1 of 1